International Carrier Sales & Solutions (ICSS), the wholesale unit of Deutsche Telekom, is celebrating its twentieth anniversary this year. To give us a look into how the organization has evolved and learn a little telecommunication history, Capacity Magazine talked with Mardia van der Walt, Senior Vice President of ICSS. She also gave Capacity Magazine a peek into current and future developments at ICSS 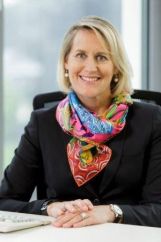 Let’s start at the beginning - exactly when was ICSS launched?

What was the reason behind starting a dedicated international wholesale service unit?

The market was ripe. The European Union was going to open competition for the international voice market as of January 1, 1998. We anticipated what was coming and knew we needed to become more competitive with voice. After we made the move, many other carriers also initiated their own wholesale units.

How did the wholesale business develop over the years?

In the beginning, we all saw a bright light in the future. There was a new promise of unlimited growth due to the Internet bubble. Carriers across Europe, the United States and Asia therefore invested heavily in infrastructure, including submarine cable systems. Of course, you know the end of that story – many went bankrupt or took tremendous losses. But we had been cautious and mainly leased facilities at that time.

What followed was a huge, industry-wide restructuring. There was a lot of pressure to sell and make profit. During this time of transition, our key products were in bilateral termination, switched transit, dedicated transit, city-to-city connectivity across Europe and the refiling of calls between third countries, which is now called hubbing.

How would you describe the changes within ICSS?

Over the years, we developed from a traditional bilateral voice carrier into a big, international wholesale organization with a broad portfolio, an international sales presence and a global network. The market conditions are tougher than ever with declining prices and EU regulations. Therefore we continually have to adapt to the changing environment. Today efficiency, scale and quality, as well as constant innovation, are essential to keep ahead of technological advances.

Speaking of that, what steps has ICSS taken to stay ahead of the game?

We have a very broad portfolio, spanning IP-based services, next-generation platforms, voice and mobility solutions, content delivery, Ethernet-based VPN services and security products. We’ve also entered into many partnerships in order to bring new solutions to the market more quickly. As you know, we integrated GTS’s international wholesale unit a few years ago, which has consolidated our Eastern European network, boosted our data centre infrastructure and given us unprecedented network coverage in the CEE region. We were the first to establish a commercial IPX platform and analysts appraise our IPX services as very strong. Our voice business will be 100 percent all-IP by end of this year and the Group will move to an all-IP network for our European subsidiaries by the end of 2018. Add that up and you will understand why we are one of the leading wholesale carriers in Europe.

What would you say is the main contributing factor to ICSS’s success?

ICSS has a great ability to adapt. Many said that the voice business is dead, but, in fact, we have managed to stabilize our voice business at significant scale. With our data business, we have experienced growth. I attribute that to our flexibility, agility and scale, which have also opened up new customer segments for us. Today we have an exceptional portfolio that we have been able to establish and sustain through our Group synergies and the financial stability of Deutsche Telekom. We are committed to being a driving force behind connecting all the players in the industry, today as well as far into the future.