ICSS: A winner with customers 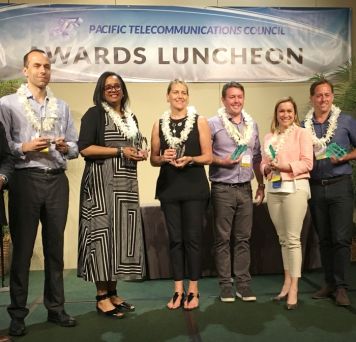 Yet again proving our high standing among wholesale customers, ICSS received a coveted Atlantic-ACM award at this year’s hotly contested ceremonies in sunny Hawaii. The award this year for “Large Service Provider Award for Sales Reps“ was based on the ratings of more than 1,400 international clients

In accepting the honors for ICSS, Mardia van der Walt, Senior Vice President ICSS, said, “This prize is especially welcome, as it is based on the feedback of those who directly use the services of telecom providers. We’re grateful that they’ve expressed their satisfaction in this way.” Customers recognized the work of ICSS’ international team of sales reps, who are positioned locally in key markets with the backing and reliability of global support.

Atlantic-ACM, a strategic advisory and research consultancy company, sponsored the awards, which took place at the Pacific Telecommunications Council conference in Honolulu, Hawaii on the 20th of January 2016. The annual convention is the premier telecommunications event in the Asia-Pacific area, where this year’s theme focused on the future of the industry in light of new technologies and higher bandwidth opportunities.