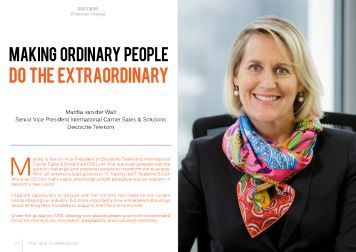 We are at a point of no-return in the evolution of our industry, where wholesalers need to completely re-think the way they go about their business. In the special edition “THE NEW COMMANDERS” Isabelle Paradis, President, HOT TELECOM, has taken a look at what new wholesale entrepreneurs have to say about re-thinking the business.
She also discussed with Mardia van der Walt, not only her views on the current trends shaping the industry, but more importantly how wholesalers should go about shifting their mindsets to adapt to their fluid environment.

Reshaping our industry
We are going through multiple changes in the telecom world, but in your view, which are the main trends reshaping the wholesale industry?

We can look at the current telecom evolution from two different perspectives. One is from the end-user angle and the other from the technology standpoint. From the point of view of end-users, one of the most important shifts is the expectation of continued connectivity and all-you-can-eat packages, which in my opinion will possibly translate into free access to services over the long term. People are getting used to consuming as much data as they want. This is a major shift from what we have known and it is definitely shaping our world. To that, add the current changes in roaming regulations in Europe, such as introducing the concept of roam-like-home. This will not only further boost mobile consumption while travelling, but it will also challenge the current business model and will force us to adapt to this new mobile environment. From the technology perspective, we see the acceleration of data shifting to cloud, which brings concerns around security, as the public internet was not built to support ecuritysensitive applications. Next, there is the internet of things, which drives the need for connectivity and again,security. Finally, network virtualization has grown, which impacts how we interwork and interconnect. These are all challenges that are not only reshaping our industry, but are also bringing new opportunities for those who embrace them.

Enabling 360º Security
How is Deutsche Telekom addressing all these challenges?

For the industry as a whole, it is difficult to precisely calculate where the wholesale business is headed. We have, however, undertaken our own investigations and are choosing the areas we will focus on in the future. One of them is definitely security…