October 12: Deutsche Telekom has won the renowned Readers’ Choice Award from the IT security platform Security Insider in the category DDoS Protection Services. The DDoS Protection product from Telekom Security was awarded the 2017 top platinum prize on Thursday evening, followed by solutions from F5 and Akamai which won gold and silver. 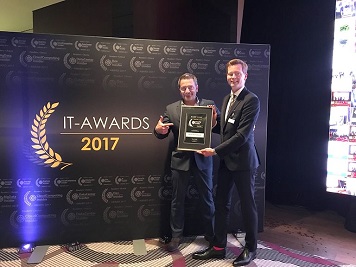 Disabling servers through distributed denial-of-service attacks (DDoS) is a frequently-used tool by cybercriminals that often has a serious impact, and Security Insider’s readers selected Telekom Security’s flexible solution as their favorite method of combating this threat. Given the stakes, the problem must be addressed on several dimensions.

For hackers, it is no longer simply about overloading a server to bring it to its knees. In some cases, certain programs and access systems connected to the internet are also vulnerable, and they often require much less “brute force” to penetrate.

Telekom Security takes a multifaceted approach in these cases: First, suspicious packets are stopped at the backbone network - when a significant increase in data traffic is detected, for example. In addition, customers’ on-site servers can be protected from intelligent DDoS attacks that don’t require large BOT networks or “raw power.”

ICSS's security expert Max Roettgermann, who accepted the prize as Senior Product Manager IP Transit and DDoS Defense on behalf of Telekom, said: “We are very happy about the selection our customers have made. It shows that our technical approach in protecting against DDoS attacks in the backbone is the right one, and that we’re making the internet a safer place.”