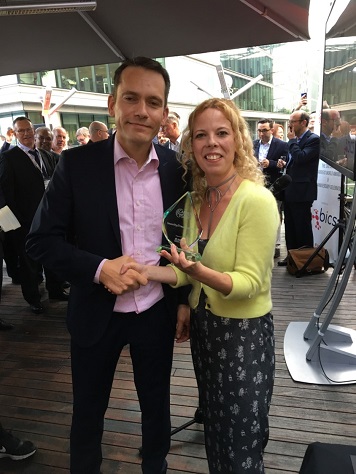 ICSS is proud to announce its latest award. This time it is the coveted Carriers World Award. The winners were announced on September 26 during the evening celebration of the 20th anniversary of Carriers World - London’s leading global capacity event which includes the Carriers World Awards. ICSS had entered for the first time and won in the category “Best Security/Fraud Solution”.
Overall 28 leading players in the wholesale market had applied to win one of 11 categories.

The Carriers World Awards are unique in the industry as the winners are not determined by a panel of judges; instead, the whole industry votes for the organizations they feel are most deserving. Over 4,000 people voted which adds up to 41,000 votes across the 11 categories.

The “Best Security/Fraud Solution” award recognizes once again the progress ICSS has made in the area of security. With our 360 ° Defense strategy including some newly launched products, we offer a greatly expanded security portfolio that offers a complete protection against different types of fraud and cyber theft.

“It’s a great honor to be endorsed by thousands of people from our industry, as they are directly affected by the services we offer, said Mardia van der Walt, SVP Deutsche Telekom ICSS. "This really reaffirms that we are on the right track and have gained even more visibility with our strict focus on developing a proactive 360°security strategy that includes state-of-the-art and inherently safe solutions.”